Not too long ago I encountered some issues when configuring UEM and IDM integration. When providing the vIDM URL in UEM for configuring the integration it would error out with below error: 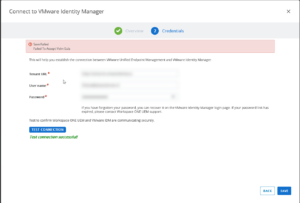 After some troubleshooting it appeared that the access policies where not properly configured as in the last rule in the default access application ruleset was blocking access. Resolution was editing the default policy and ending it with the password method which is associated with the built-in workspace IDP, after that the integration part is working as expected.

Another configuration task which caught me by surprise was that after the configuration is set up between UEM and vIDM the following errors occurred:

Turned out that the integration between UEM and vIDM is depending on Active Directory integration. The basic system domain accounts (even full admins) won’t work in this scenario. Resolution is configuring an domain account with the necessary admin rights in both tenants and then it will work as expected.